EYE OF THE WIND

EYE OF THE WIND 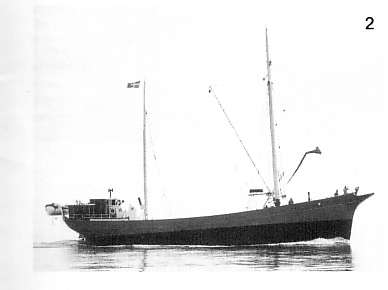 EYE OF THE WIND is back to German ownership since April 1, 2009. Her homeport is Gilleleje, Denmark. See my comments at:
http://www.shipspotting.com/gallery/photo.php?lid=1223806

Greetings from the white Berlin,
Werner

In the “Stapellauf” 1911 her name was “Friedrich”. She had been built in the dockyard of Lühring. 1923 she has been sold to Sweden and from then on she was named “Merry”. She used to be a transport ship in the East and North Sea for 50 years. During those years her masts had been removed and she was converted to a motor boat. After a fire in 1969 she seemed to have come to the end of her life cycle. Fortunately she was found by a group of windjammer enthusiasts who 1973 started rebuilding her as a sailing ship.
She was being equipped with 2 masts and rigged as brigantine. The group was looking for the original material for the rig and the construction all over England and the world and found it. A former dance hall floor made from resistant teakwood was being used for the construction of the deckhouses and age-old church benches were being used for the lower saloon, which create a unique maritime atmosphere. All blocks were carved from wood and partly by complex handcraft. Like that with the rebuilding of the “Eye of the Wind” a unique ship-jewel has been created.

The optic and the special atmosphere of the ship is probably what made her a movie star. Without knowing that it is the “Eye of the Wind” many people know her from movies like “Blue Lagoon”, “White Squal”, “Taipan” or “Savage Island”.

In 1990 the “Eye of the Wind” sailed the South Sea and took part in the 200 year celebration of the settlement of the Island Pitcairn (mutiny of the Bounty). In 1991 she passed Cape Horn for the second time and returned to England 11 months later. As a sailing-training-ship she was sailed many different seas and visited the best known harbors in the world.

In 2000 a Danish entrepreneur renovated her completely and equipped her with state-of-the-art technology and electronics for navigation. Fortunately he took care that her traditional character was preserved. Even today setting the sails occurs due to the use of pure muscular strength.

Up until 2009 the “Eye of the Wind” was not accessible for public and after the sudden death of her owner was looking into uncertain future. On April 1st, 2009 she found a new owner with the Forum Media Group. Now she is being used for leadership trainings to practice in the “small world” of the ship and apply the knowledge to the “big world”. Under the direction of her new owner she is also going to discover the oceans again and find new fans and friends.
Eignerangaben.
To sail on the „Eye“