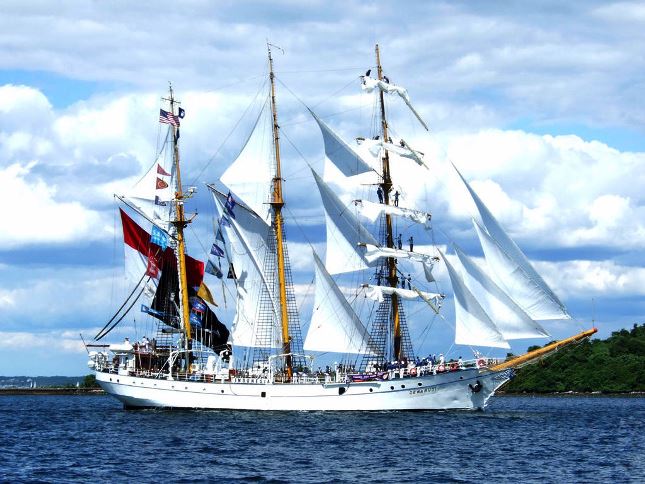 KRI Dewaruci (sometimes spelled Dewa Ruci or Dewarutji) is a Class A tall ship and the only barquentine owned and operated by the Indonesian Navy.[1] She is used as a sail training vessel for naval cadets and is the largest tall ship in the Indonesian fleet. The Dewaruci also serves as a goodwill ambassador for the country of Indonesia to the rest of the world.

Built in Germany by H. C. Stülcken Sohn at Steinwerder, Hamburg.[2] Construction on the Dewaruci began in 1932, but was suspended due to the outbreak of World War II, which caused heavy damage to the shipyard where she was being constructed.[citation needed] She was launched on 24 January 1953 and completed on 9 July that year.[2] Since then, she has been based at Surabaya on the Java Sea. Her name and figurehead represent and display the mythological Javanese wayang god of truth and courage. This ship is the largest tall ship in the Indonesian fleet operated by the Indonesian Navy and used as a sail training vessel for naval cadets and serves as a goodwill ambassador for the country of Indonesia to the rest of the world. The ship also holds a mission to promote Indonesian tourism through the “Wonderful Indonesia” brand. The vessel was also used in the making of Anna and the King movie, starring Jodie Foster.[3]

The Dewaruci also participates in tall ship races and events around the world. As a unique feature, the ship has her own marching band. In 2010 the Dewaruci’s marching band delighted and entertained the crowds in Hartlepool at the Tall Ships Crew Parade. Their energy, enthusiasm, and skill won them the prize for the best crew in the crew parade.

Due to her age, Dewaruci is to be pensioned and displayed at naval museum. The Indonesian Parliament has agreed to buy a new tall ship and has appropriated $80 million (Rp720 billion) for the purpose. The new ship will also be named Dewaruci. The new vessel is to be completed in 2014.[4][5][6][7][8][9]