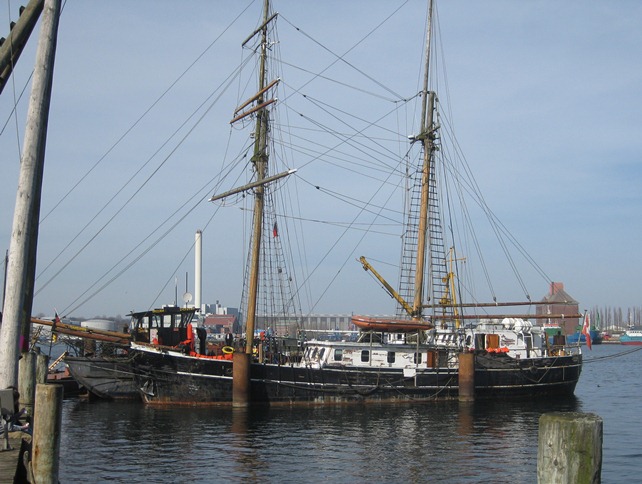 Built 1953 by the Andersen & Ferdinandsen yard at Gilleleje, Denmark, and delivered as the ketch-rigged cargo vessel with auxillary engine CHRISTIAN BACH O.Y.R.A. (Hundested). Owner: J. C. C. Bach of Lynæs, Denmark.
Yard no ? – GRT 100 – NRT 47 – TDW 135 – Measurements: 27.80 x 6.85 x 2.78
In her day as cargo vessel she traded in the Baltic, servicing ports in Germany, Denmark, Sweden and Norway mainly.
In 1976 she was sold on to a Mr. Henderson of Grimsby, England, who had her rigged as a Brigantine and fitted out with accommodation for 10 passengers and 12 crew. She was intended for cruises in the Carribbean. She apparently retained her name until around 1981, when she was purchased by a company under the umbrella of the Tvind Schools headed by Danish Amdi Petersen. She was then named LILLE BJØRN and deployed as a training vessel. In 1990 she was given the name SPIRIT of WINESTEAD.

The LILLE BJØRN , the 117 feet brigantine as mentioned above, later on went on a voyage with pupils from Panama, destination the Galapagos Islands. One of the staff on board, B. J., has told me how they for a fortnight drifted about in the Pacific with engine failure and with a group of violent pupils, unwilling to accept any authority from neither crew nor other staff.
Among other frightening incidents, the pupils attempted felling the main mast with the fire axe, and still today, 1998, you can see the carving of the wooden fore deck, caused by a fire set by pupils on that voyage.
For the period of fourteen days, the ship was without propulsion, had no engines standby. Not even auxiliary engines did work, so the vessel ran out of electric power supply, causing loss of radio contact with other vessels or shore.
This incident is not known by but to a few Teacher Group members. It has been kept secret, like so many other incidents on trips.
The North Sea, 1994:
When sailing from England to Denmark with my English “small school” on board the Spirit of Winestead, the vessel with ist 12 pupils and 8 adults on board was exposed to a “knock down”.
Around midnight, we ran into a bad thunderstorm. Suddenly, the ship was turned by the wind. Now the vessel had the wind on the beam and swayed over on the side. This can be very dangerous as the yardarms could be caught by the waves, making the ship capsize. However, the Crew managed to get the vessel righted up again.

Extracts from a report, Written and submitted by a Tvind Teacher, to the Danish Ministry of Education on 03.12.1998.
Quelle: http://7seasvessels.com/?p=3718 und http://www.fiskekuttere.dk/traskibe/traskibegi.htm
Hinweis Andreas Zedler 17.7.2012